Instagram 6.0.5 update for iOS is supposedly a “bug fixes and performance improvements” release. As it turns out the new Instagram offers more than that. Bug fixes and improved performance is always good. END_OF_DOCUMENT_TOKEN_TO_BE_REPLACED

The Agnostic Platform: We’re Building Our Own God 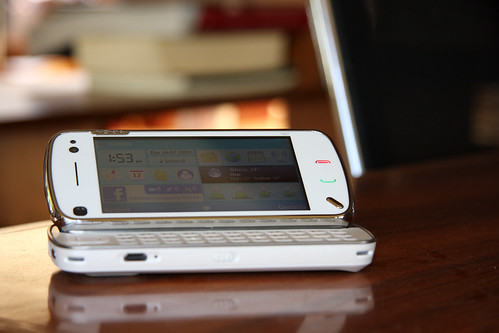 I don’t know if it’s Nokia or Facebook that designed and engineered the Facebook application for the N97 but it feels like someone flew from Cupertino to Espoo to design the application while having had vodka and sauna during his launch breaks. Seriously, Facebook on N97 it’s the closest thing to the desktop experience with only the options and functions that matter. The design philosophy and simplicity of the applications feels so like Apple but you know it’s not. It’s S60 5th edition with all its prons and cons that runs the N97 Facebook app on this 3.5 inch, 640 x 360 pixels (16:9 aspect ratio) touchscreen. The Facebook app for the iPhone 3GS is responsive and fast due to faster CPU and GPU with transition effects making the experience smooth but that’s all about it. It lacks the immediate engagement and using pleasure of the N97 app. Truth to be told: the N97 faces minor delays here and there, when fast switching the app’s menus. END_OF_DOCUMENT_TOKEN_TO_BE_REPLACED