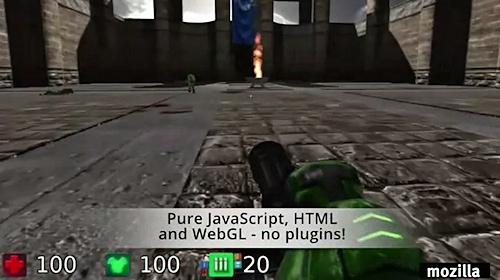 Steve Jobs is known for many traits and preferences, like his decision not to allow Adobe Flash to run on iOS devices such as the iPhone and the iPad. In his famous Thoughts on Flash response to Adobe criticism about the exclusion of Flash in Apple mobile devices, Steve Jobs wrote:

Rather than use Flash, Apple has adopted HTML5, CSS and JavaScript – all open standards. Apple’s mobile devices all ship with high performance, low power implementations of these open standards. HTML5, the new web standard that has been adopted by Apple, Google and many others, lets web developers create advanced graphics, typography, animations and transitions without relying on third party browser plug-ins (like Flash). HTML5 is completely open and controlled by a standards committee, of which Apple is a member.

Adobe gave up the development of Flash for mobile devices, making Steve Jobs look like a winner. The truth is that Firefox 15 really shows why Steve Jobs was dead right for avoiding Flash on iOS devices such as the iPhone and iPad.

Firefox 15 just released with a bunch of new features such as reduced memory usage and “allowing game developers to take full advantage of video memory to build graphics-heavy games without losing performance with an improved JavaScript engine and enhancements to WebGL”.

Remember what Steve Jobs wrote on Thoughts on Flash almost 2 years ago: “without relying on third party browser plug-ins”.

Now go and watch the demo video yourself to believe this is Firefox 15 running a 3D WebGL games in HTML5 and JavaScript without any plugins (0:18). According to Mozilla Demo Studio, BananaBread is 3D first person shooter game compiled to JS+WebGL. Built with HTML5, Audio, JavaScript, WebGL, Web Workers.

With the ever increasing CPU and GPU capabilities on mobile devices and the ever decreasing power consumption, even in the Retina era, HTML5 and JavaScript is the way to go for cross platform development and wide acceptance of any work. Remember, even iAd is built on top these very same technologies: iAd Producer makes it easy for you to design and assemble high-impact, interactive content for iAd. It automatically manages the HTML5, CSS3 and JavaScript behind your iAd to make creating beautiful, motion-rich iAd content as easy as point and click.

Now look at some of the new devices coming out and the kind of hardware they use. Multi-core GPUs, HD displays, fast cellular data for 3D graphics with beautiful textures wherever there is GSM coverage and platform agnostic devices aka HTML5 ready browsers.